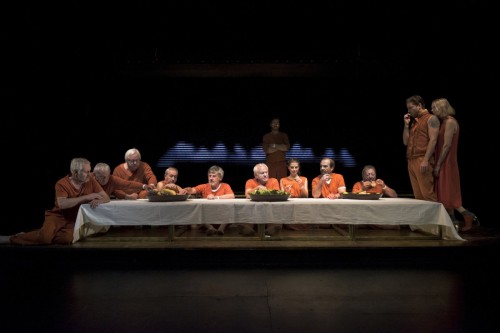 Caligula is a play written by Albert Camus just before World War two. It tells the story of the cruel Roman Emperor Caligula. He loses his sister and lover Drusilla and cannot deal with this. After wandering in the fields for three days he returns with an absolutist world view. Unable to deal with the relativitiy of everything, and most notably, happiness, he enters a reign of terror.

Everything becomes literal, freedom absolute. If a man desires his neighbour’s wife, he takes her. And if the neighbour stands in the way, everything is valid to remove the neighbour as an obstacle. Caligula’s word becomes literal law, marked by randomness and terror. In between these scenes, there’s moments where Caligula speaks with his mistress or one of his advisers and we get philosophical musings about the nature of existence.

I saw it yesterday, in the Schouwburg, performed by the Toneelhuis.

Because the play was originally performed for the first time after the World War, it has generally been interpreted as indictment against abuse of power and dictatorship. With the current international climate of extremism it’s gained a new poignancy.

I enjoyed the modern touches in appearance and set-dressing. The use of movable video panels as a sort of ceiling/back panel was very effective in framing the stage. The actors were really good, in particular Kevin Janssens as Caligula.

If it takes a lot of words to say what you have in mind, give it more thought.