So… Tuesday my new manager, who I’ve had all of two weeks at the most, announced they’re stepping down. No word yet on successor, but that might take a while. Interesting to see what happens with a power vacuum like that.

Yesterday I went to the movies with Gert. We watched Divergent first. He hadn’t seen it yet, and I didn’t mind watching it again. After we had a little break and then went in to see Yves Saint Laurent. That was a very good film. Insofar I’m familiar with the fifties and sixties it seemed to me a fairly realistic film that gave a good picture of who YSL was and how he was shaped by his life and experiences.

We had dinner at Pappa Joe’s and then went for ice cream at Toscana, they have the best selection of flavours ever.

Tonight, The Passion was in Groningen.  A huge musical show and parade to play out the passion of Christ. Various singers played the key biblical figures singing contemporary songs to symbolise the emotions and events of each sequence. Meanwhile a huge group of people carry and follow this huge shining cross to the center of the celebrations. This is the third time or so they did this, and since I’m not a Christian, Easter has little meaning to me in this sense. Since, however, it was Groningen, I did watch it on TV. I tweeted some comments during (and really, they had the stupidest hashtag: tp14…) but in short: the guy playing Jesus had the right vibe going, especially beard-wise. The guy playing Judas is a musical star here and it showed. His voice was by far the best for an event like this and he had this brooding vampire vibe going which worked well. 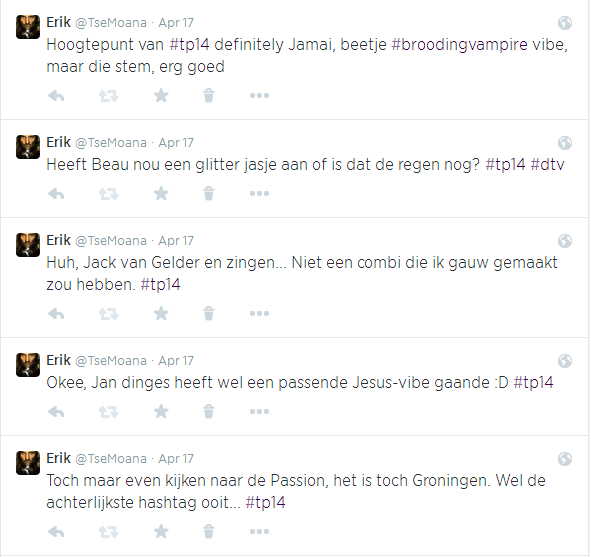 An archeologist is the best husband any woman can have: the older she gets, the more interested he is in her.