Friday was this party from work. And I’m not normally a party kind of person, but this time, I decided to go. Mainly because of the other people that were also going 🙂

We (being Nienke, Nico and I) decided to go “fancy dress”. Nico’d bought a suit, Nienke had a sparkly dress, and I bought new pants and a red shirt to go with the vest I already had. Accessorized it up with my pocket watch and a silver sparkly bow tie (as did Nico). Meeting point was outside work, and there would be limousines to drive all of us to the party location 😀

Turned out there were three, a Lincoln, a Chrysler and a frakkin Hummer! Of course we decided to take the Hummer 😀

The party itself was actually really good. Not at all what I had expected (I tend to end up in corners going ‘can I go home now?”).

After the obligatory waiting, and the intro talks the music started, and it was actually good. It was this DJ duo where one of em regularly played the violin with the music the other guy was doing. I’d never seen something like that before and I really enjoyed it. Plus it was good music to dance to.

I usually have a hard time not moving when I hear music, or singing along. So before I knew it, I was dancing. And that had been a while 😀 I ended up dancing along another co-worker, picked up some extra moves and had an all around great time.

Too bad we had to leave early because stupid public transport. 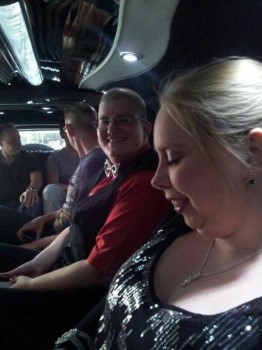 Consider how much more you often suffer from your anger and grief, than from those very things for which you are angry and grieved.